Her father was Lt Col Edward Carew Sandars CMG. He fought in the South African War and retired from the army in 1910, but served again with the outbreak of war with Germany in 1914. Before the war he had been charged with finding horses for military use from Oxfordshire, Buckinghamshire and Gloucestershire, and during the war he became Deputy Director of Remounts in the Royal Artillery. After the war, he became active in local government as a county councillor. He died in 1944.

Nancy's mother was Gertrude Annie Sandars (née Phipps). Her family were planters on St Kitts in the West Indies and were descendants of James Ramsay, the 18th Century campaigner against slavery. They returned to England in the late 18th century. During the First World War, Gertrude joined the Voluntary Aid Detachment (the VAD) providing care for wounded soldiers in a hospital outside London. She was interested in literature and wrote plays, some of which were performed in Little Tew. She died in 1934, when Nancy was 19.

Nancy's elder sister, Betty (Elizabeth) Alys Sandars, was born a twin but her brother, Hugh Ramsey Sandars, died at the age of eight. Betty was eight years older than Nancy and they shared the family home in Little Tew together until Betty died in 1995.

Nancy was initially educated at home by governesses, one of whom would arrive by bicycle from North Aston. Nancy then attended two schools, one near Wokingham, and one in Oxford. Her education was interrupted by tuberculosis affecting her eyes, which prevented her from reading. This illness continued for several years, during which time she was sent to a sanatorium in Switzerland for treatment which was eventually successful.

Following on from school-based education, Nancy received individual coaching in Oxford and London. She was taught acting and recalls that her London tutor refused her request to teach Greek and taught her Logic instead, which she hated.

After school, Nancy's parents offered her a choice of pursuits – hunting, which was popular in Oxfordshire, or foreign travel.  She chose the latter. 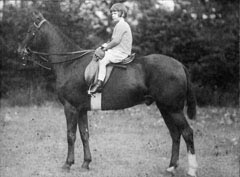 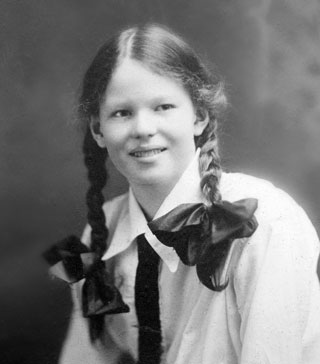 Nancy Sandars as a girl